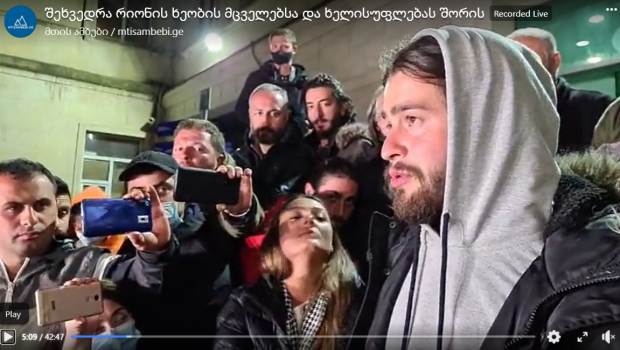 On 13 April, protesters clashed with the police in village Gumati. They were demanding lifting the restriction to the freedom of movement in the area. 10 people were detained.
The next day, the police erected an iron wall on the road in Gumati
The photos of the wall were posted on social media, prompting backlash from the public.
Popular singer and author Erekle Deisadze wrote on Facebook that this is a “creeping occupation” by our own government.
The phrase “creeping occupation” is used to characterize Russia’s recent expansionist strategy towards Georgia.
Vakhushti Menabde, a professor of constitutional law at Ilia State University, wrote on Facebook that the wall symbolizes a deep divide in our country. “It symbolically separates those people who are defending the public interest from those who are only motivated by private interests,” said Mr. Menabde.

On 14 April, the activists gathered near the wall, demanding its removal. They started banging on the wall as a sign of protest.
“There is no law that prohibits the act of banging on the wall and generating noise. We call this a people’s noise,” said Varlam Goletiani, one of the leaders of the anti-Namakhvani protest movement.
Writer Naira Gelashvili addressed the public on Wednesday, decrying the actions of the Georgian government. “The Georgian Dream should know that they now exist without any popular support… What they did is treason,” stated Ms. Gelashvili.
On Saturday, Varlam Goletiani said that the police removed the iron wall, but the other barriers are still in place